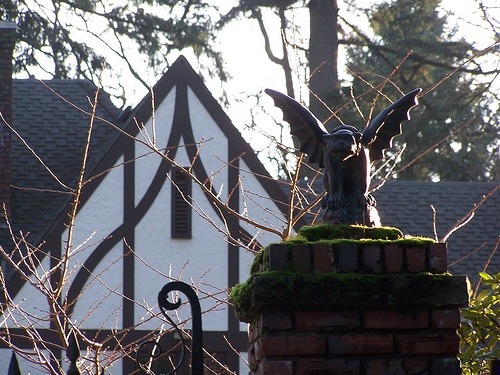 It’s Drive By Time (yes, really we should call it “Drive By Shooting” but this is a non-violent blog and I just can’t bear to title it with such a horrible name!)! I had so much fun getting these photos for you, it had been way too long since our last Drive By neighborhood tour! I really felt like you were all right there ooh’ing and ahh’ing with me. Some of them were so hard to shoot! These houses are not all out in the open, mind you. We are talking gardeners in the front lawn, gates and privacy fences, bushes and shrubs and GUARD DOGS. Luckily my husband was with me to drive as I did the shooting. 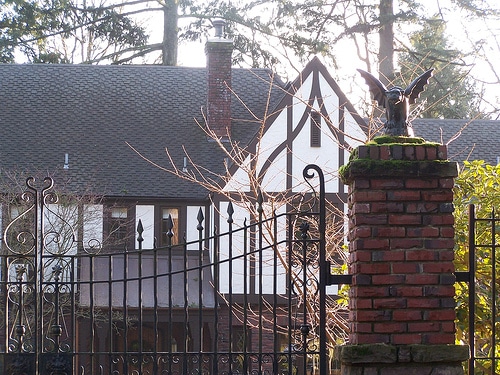 I really put myself out on a limb though for a few of these shots, so I have to apologize on the ones that are crooked or slightly out of focus! I was so nervous about getting caught by security crouching down in the rose bushes. Sometimes I had to just shoot and run like crazy! It really can look suspicious when you come leaping out of the shrubbery and get startled by unsuspecting dog walkers. I hate when that happens. But it is all a part of the dangerous world of drive bys.

So, fasten your seat belts — here we go! These next few houses are in the Irvington and Grant Park area of Portland. These houses are more out in the open than the ones coming up in the next neighborhood so we didn’t have to deal with so many obstacles. I love the purple door and trim on this one! It became pretty clear to me after viewing my photos in the first part of the tour that I was drawn to Tudors… 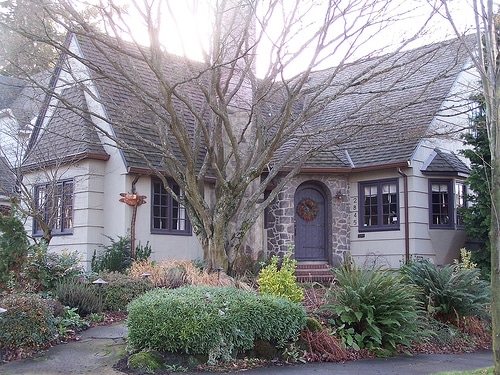 And check out their downspout! No detail too small! 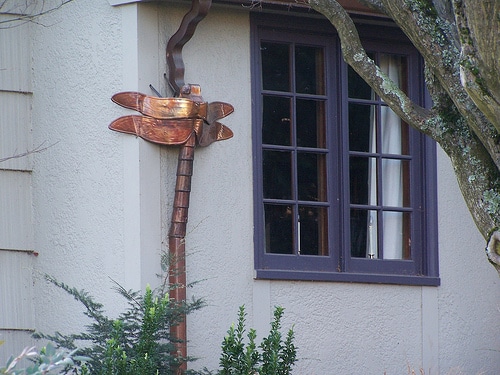 Ok, now we drove over the river to the westside of town to Dunthorpe, not too far from where I live now. This is a beautiful old neighborhood my parents used to live in. I’ll show you their house in a future drive-by, I forgot to take a picture of it! Dunthorpe is one of my favorite places for drive-bys because the houses are not McMansions or wanna be mansions, they are the real deal. Really old stately places owned by people who don’t need to impress you, they are beyond that. They like their privacy.

This next house is the one where I risked life and limb for the sake of my blog post. See the bushes in the forefront of the photo below? Yep, those are the ones I had to crawl through to get a glimpse of this beauty.

Once I got in the bushes I was able to get a little closer:

Once I made it to the “other side” I took a look around and saw this!

Oh! Happy Gasp! Can you imagine the parties I could have here?! I was so excited! I saw something you couldn’t even see from the street! I got a little lost in the moment and before I knew it I was running across the lawn towards the fireplace (see how it is a little bit blurry? That is because I am running as fast as my legs could go, closer and closer!).

I was really picking up speed when my husband shouted to me from the car:

Darn, I had to turn around and make my way back to the car. Next time, if I leave my husband at home, I might make it around to the back entrance. Before I jumped in the car, I snapped a quick picture of the neighboring house.

For the rest of the tour my husband made me stay in the car. He threated to leave me in the bushes next time — he was so embarrassed.

Ok, now this was my personal favorite (below). It was really hard to get a picture of because my husband would not let me get out of the vehicle, but I did the best I could while hanging out the car window. I loved the lights hanging in their front window! This was my fairytale house. The gate was absolutely beautiful!

Many of the houses had their gates locked shut. Probably as a precaution against people like me.

I really really wanted to get out of the car and get a little closer to this house and to that white gate! But, this was the best I could do while strapped in the car. This is such a homey home!

Now this house (below) was in such a picturesque setting! It was hard to really capture how striking the landscape was. The other amazing thing was that the property was surrounded by a moat. I’m not kidding! We figured that out when we backed into it. Another awkward “Drive By Moment”! Time for us to leave the neighborhood!

I have more pictures to share but they are going to have to wait for another Drive By.

Thanks for joining me everyone! If you missed the first Drive By from October 2007, click here!