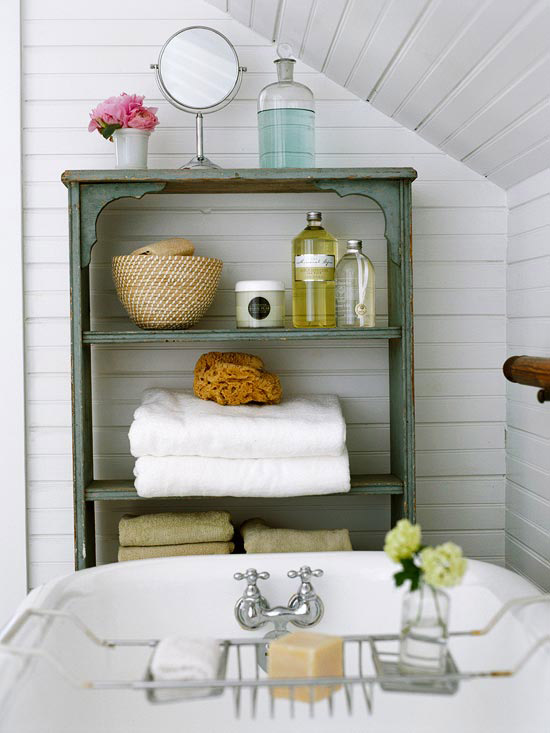 Don’t you just love a well-organized bathroom with functional and pretty storage galore? I sure do! As I’m thinking over my own house, trying to decide which home improvement projects I want to commit to this year, I keep wondering about whether to include my master bathroom.

Honestly, I’m not much of an advance project planner. Usually I do things on a whim. But I really want to be extra intentional about my time and money in 2013, and I know how easy it is to have one whim lead to another and pretty soon, you’ve gone out on a lot of whims. {grin…. whims, get it? Limb? Oh, I crack myself up sometimes.}

My master bathroom is not particularly pretty as it is, and it isn’t especially functional either. It could use a little makeover. AND, the toilet doesn’t work, so there is that.  It has been broken for a couple of years. Eh hem. But, it isn’t the worst bathroom ever, though, so I’m thinking maybe I might allow myself a little bit of a functional storage makeover with a bit of pretty thrown in (and completely avoid a total remodel, which I’d like to do someday but it really isn’t necessary right now).

We’ll see. I’m still working on my home goals for this year, so no promises of projects yet!

Enjoy this round up of pretty and functional ideas!

Need other ideas for organization? Check out my new gallery of organizing and homemaking posts! 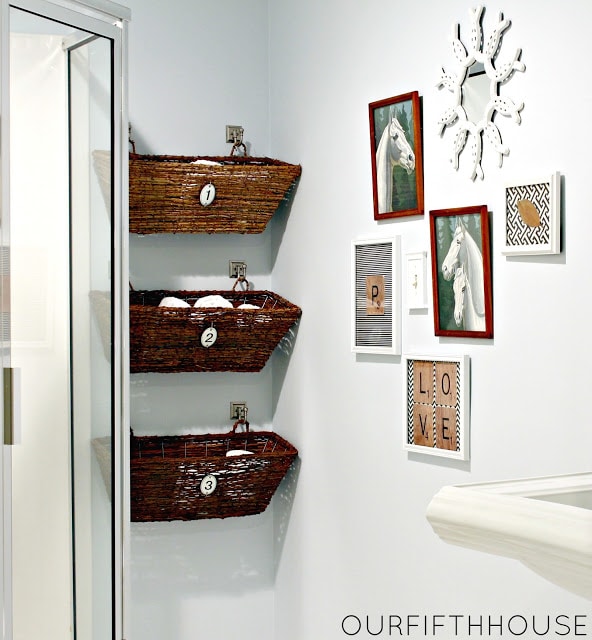 Loving these flower baskets for storage (which I already have, YAY!)
via Our Fifth House 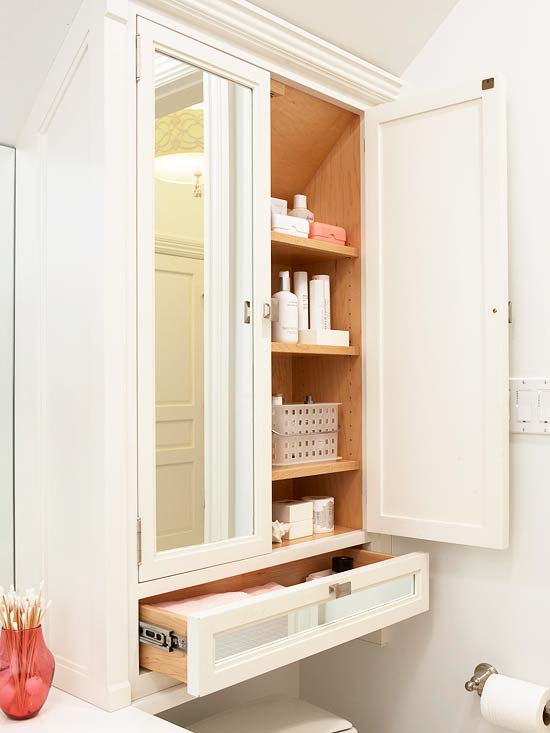 utilizing space above the toilet via BHG 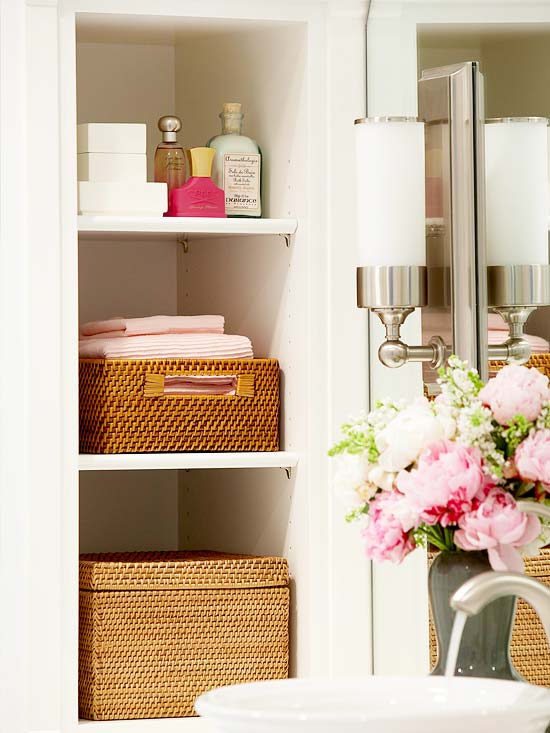 Narrow storage in bathroom with baskets via BHG 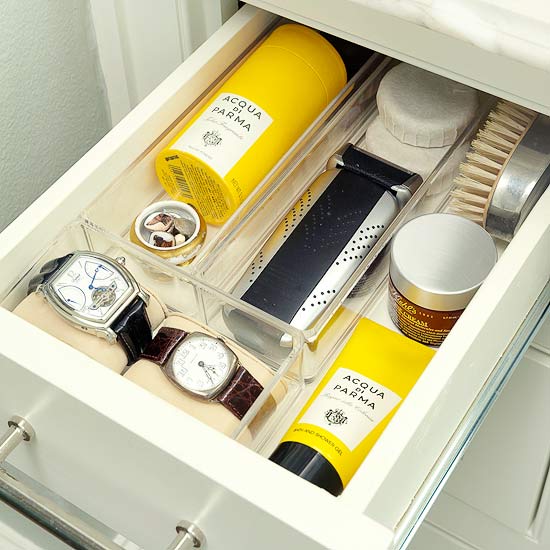 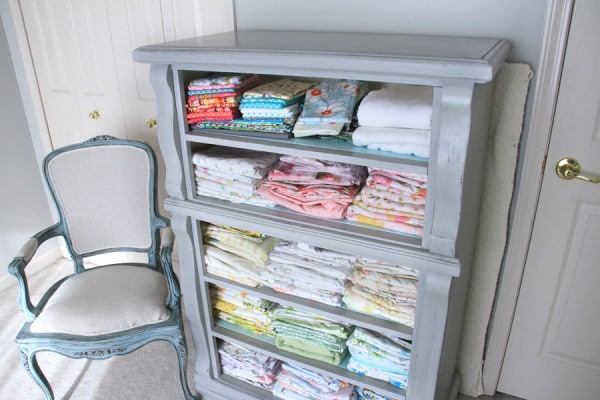 Use an old dresser minus the drawers for linen storage,
love this idea! via Cameras & Chaos 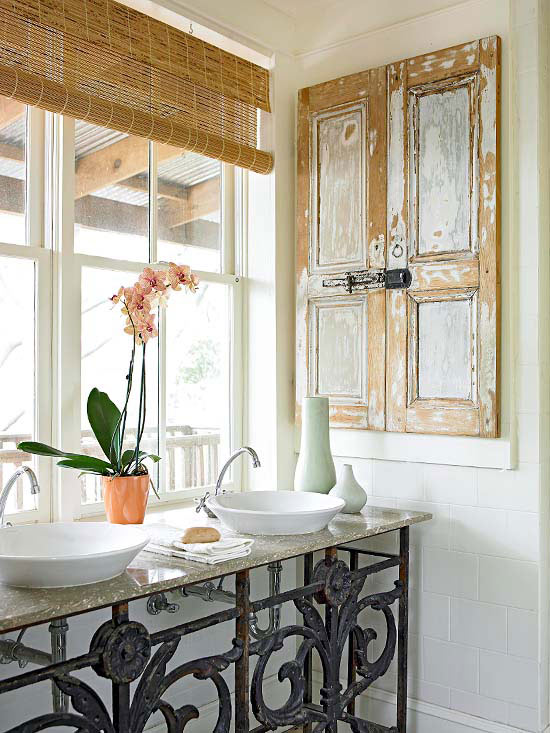 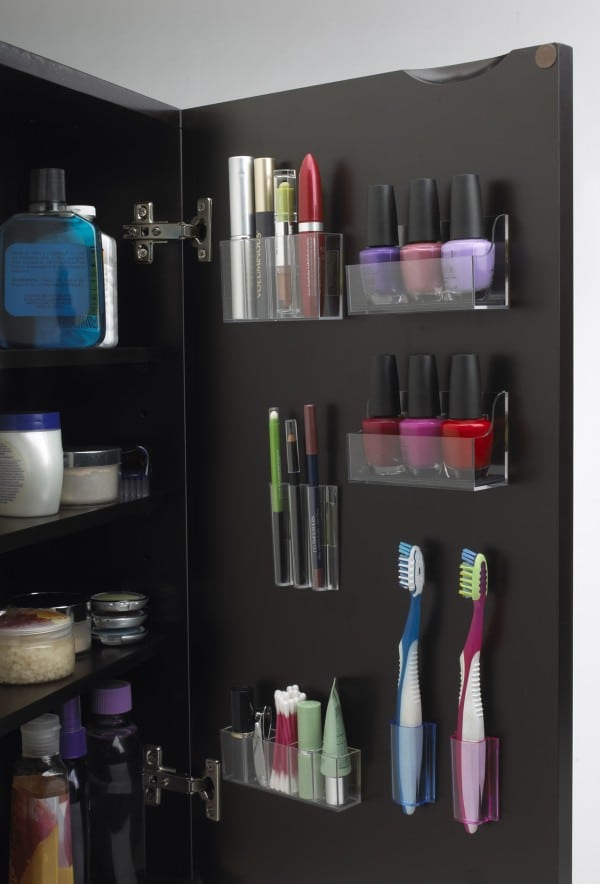 Organize your cabinet doors with these clever stick on containers!
Want to try these! via Stick on Pods 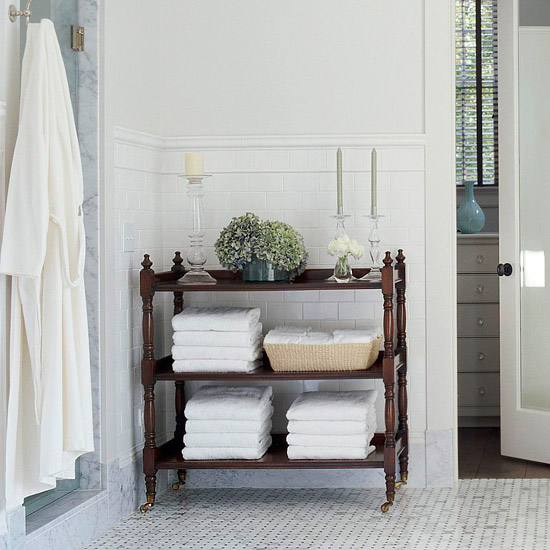 Use freestanding furniture for storage in a bathroom  via BHG 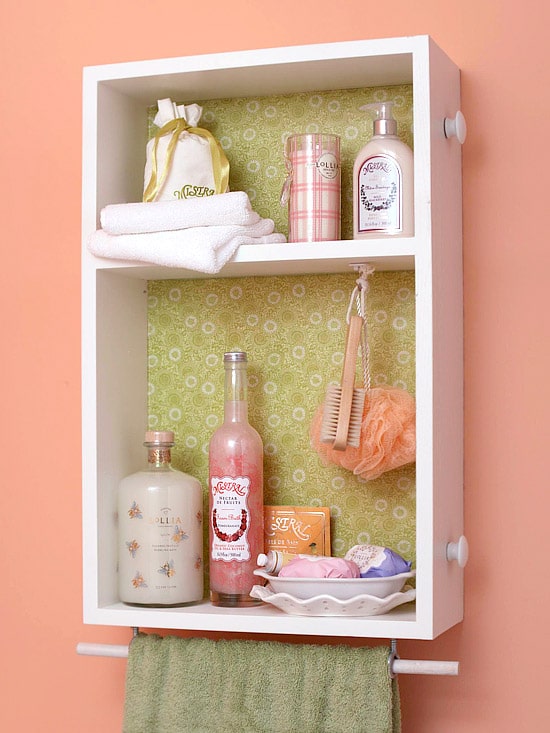 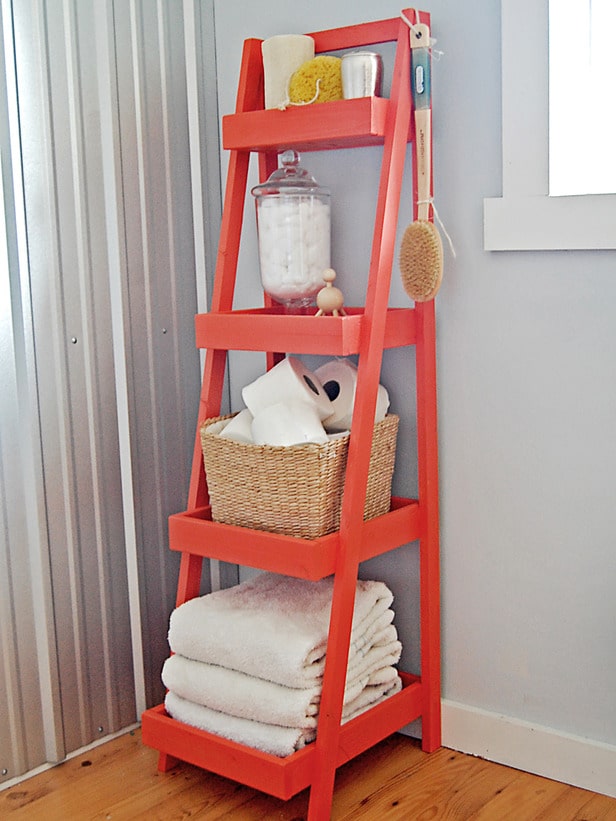 build a storage ladder via HGTV and the amazing Ana White 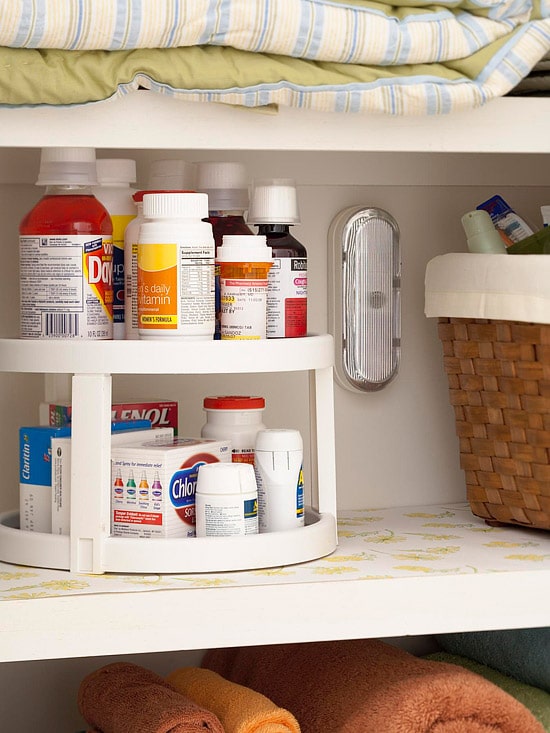 Lazy susan for neat and tidy bathroom storage via BHG 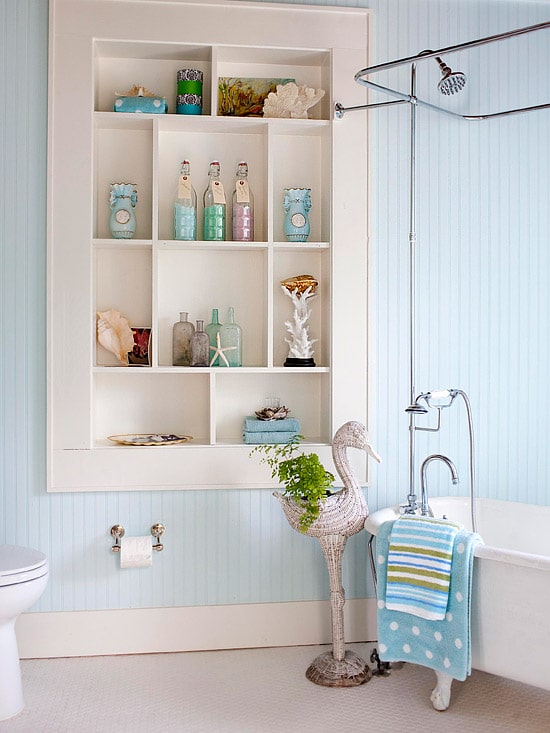 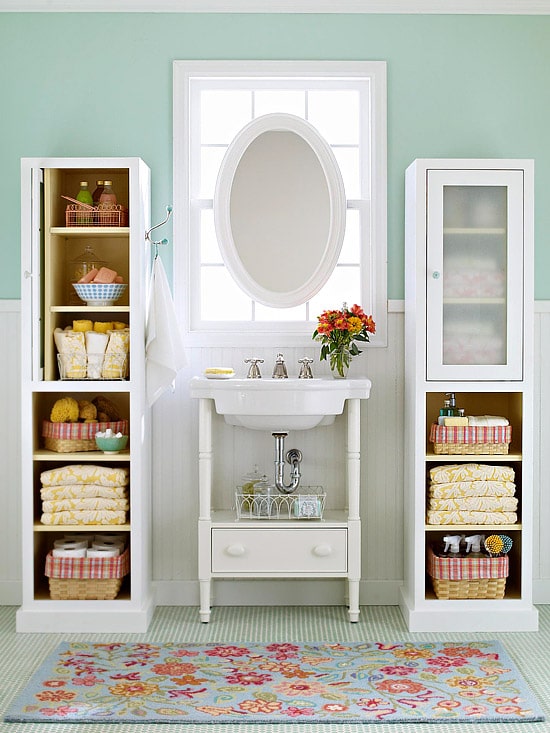 Storage towers for organizing in bathroom via BHG 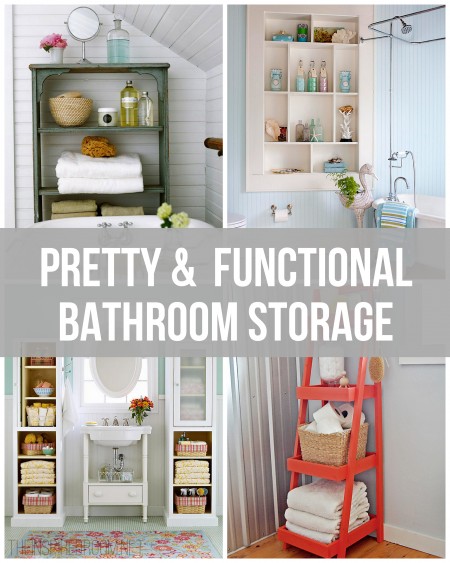 Do you have a bathroom storage or organization project in mind for your home this year?